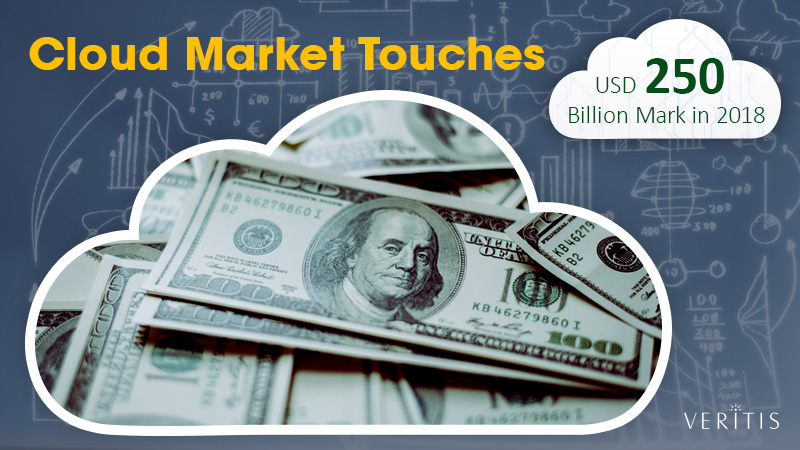 The global cloud computing market is set to pick up accelerated growth in 2019 and be witness to some user-driven cloud trends. But as we move forward, we are bound to look back at the cloud market’s performance in 2018.

The cloud market experienced a slow growth throughout 2018 but is poised for increased usage and expansion in 2019.

This growth percentage and market revenue were marked by major contributions from the public cloud infrastructure along with a rise in other cloud segments throughout 2018.

Following are the cloud trends for 2018:

A major chunk of cloud infrastructure hardware and software projected tremendous growth in 2018 with public, private and hybrid cloud.

“This is just the law of large numbers kicking in. You cannot keep on growing at 100% when you reach massive scale,” said Synergy Research Chief Analyst John Dinsdale.

However, the spending on cloud services exceeded the capital invested in hardware and software used to build the cloud in 2016. This deficit has only been widening dramatically since the last two years.

“In 2018, cloud started to dominate IT spending in some areas, sucking up potential growth opportunities for non-cloud technologies and services,” said Dinsdale.

“Cloud technologies are now generating massive revenues for both cloud service providers and technology vendors and our latest forecasts show that while market growth rates will inevitably erode due to the sheer scale of the numbers, the overall market will double in size in under four years,” he added.

Despite the popularity of the cloud and its anticipated growth, the cloud market is taking its own slow growth pace. But it undeniably has the potential to continue growing for the next few years.