Top #3 Cloud Predictions for 2019 and Further

Cloud has made notable progress in 2018 with wider adoption among firms of all sizes, especially among the small and medium businesses.

With its budget-friendly options, cloud trend instilled some hope in the small and start-up firms empowering them with tools and technologies that can give a competitive edge. Besides, it did not stop penetrating deeper into larger enterprises on the other side!

Overall at the end of 2018, Cloud Computing with DevOps emerged as the most-sought technology trend for almost every enterprise in their efforts to exhibit some fresh and winning performance.

As the leading surveys say, cloud adoption in North America alone has grown five-fold in the last five years, with more than 60 percent firms relying on public cloud platforms.

Finally, Cloud made its way into 2019 throwing some bigger predictions such as: 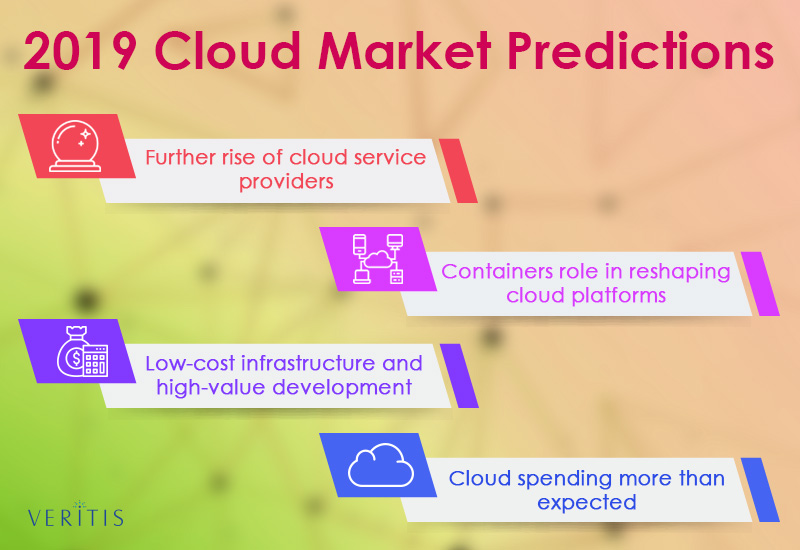 Given all these predictions, the cloud technology is expected to emerge as a ‘new enterprise digital application platform’ altogether.

Top-3 predictions for the Cloud Technology Performance in 2019:

1) Enterprise Cloud Spending Linked to App Modernization
Enterprise cloud spending is expected to see a new rise in 2019, owing to the increasing demand for modernization of existing applications and core business processes such as transaction systems, inventory, databases, and operational apps, among others.

Modern applications are also going to play a key role here as the companies would need them to deal with the data already collected.

And, cloud Software-as-a-Service (SaaS) apps and cloud-native technologies such as containers, functions, and Kubernetes are going to be key for modernizing applications.

However, the role of Machine Learning (ML), Artificial Intelligence (AI), Internet of Things (IoT) and Edge Computing is going to be very key in application enhancement. All these reflect in the rise of enterprise cloud spending to get the work done!

2) Private Cloud Adoption and Spending at a Faster Rate
After years of stagnancy on private cloud strategy, enterprises are most likely planning for private cloud adoption in 2019.

While many firms are busy in deploying their functions onto the public cloud platforms, there are many preparing for on-premises cloud environments to empower their in-house data centers during the year.

The prime intention is most likely to transform their in-house data centers to cloud powerhouses.

Moving beyond the traditional aspect of server provisioning, the private cloud market performance in 2019 is expected to be more of ensuring automated, flexible, agile and software-defined software development platform.

Organizations are expected to build private clouds on top of their existing setup, majorly relying on open source platforms, or build own private clouds that work well for in-house requirement.

Overall, enterprises are more inclining towards on-premises and hybrid clouds.

3) SaaS-based Cloud to Drive Innovation
SaaS applications are going to be the key drivers for the revival and growth of the industry cloud market in 2019, forming the core of their operation.

Over the year, enterprises across all industry verticals are going to pay special attention to platforms operated by companies with a better understanding of business and industry.

In the process, many SaaS vendors have already begun preparing for ways to effective integration and extending their platforms beyond their existing strengths.

Many app market leaders are already making moves to diversify their existing platforms and make add-ons such as bringing in new development tooling, deployments, and integrations, all to gain the complete traction of their targeted industries.

While SaaS apps have already begun transforming into development platforms, the result of this shift is going to be seen in 2019.

On an EndNote
Overall, 2019 is to present a new level for the cloud market paving way for the establishment of cloud computing as the true foundation of tomorrow’s enterprise application platforms. And, firms are also thinking of ways to come up what customer demands.

All this is expected to result in increased cloud spending among enterprises as they gear up for early adoption of cloud tools and services in all possible ways while addressing security and other cloud-related challenges too.

It’s time to catch up with the trend, the Cloud Way!