Cloud Shift Trend: A Glance at Prospects for 2018-22 Period 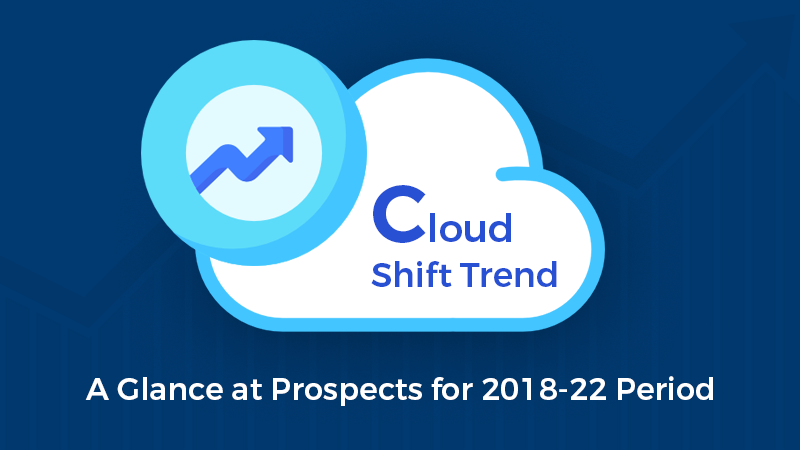 Gartner confirmed this in its recent report, where it said, “Growth in enterprise IT spending on cloud-based offerings will be faster than growth in traditional, non-cloud IT offerings.”

According to Gartner, cloud-based offerings will account to nearly 28 percent of spending within key-enterprise IT markets by 2022, showing a 19 percent rise compared to 2018.

However, traditional offerings will also play their part by constituting 72 percent of the addressable revenue among these markets in 2022.

“The shift of enterprise IT spending to new, cloud-based alternatives is relentless, although it’s occurring over the course of many years due to the nature of traditional enterprise IT,” says Michael Warrilow, Research Vice-President at Gartner.

“Cloud shift highlights the appeal of greater flexibility and agility, which is perceived as a benefit of on-demand capacity and pay-as-you-go pricing in the cloud,” Warrilow adds.

The report found that a paradigm shift to the cloud will directly/indirectly have its impact on more than USD 1.3 trillion spending in the IT industry and providers catching up this shift can see a long-term growth.

According to Gartner research, Application Software was the area that witnessed the largest cloud shift prior to 2018, majorly because of the Customer Relationship Management (CRM) segment, which is already seeing higher spending on cloud than on traditional software.

Whereas, System Infrastructure is poised to see the fastest shift between 2018-22 period by welcoming nearly almost one-half of the addressable revenue by 2022.

“System infrastructure will be the market segment that will shift the fastest between now and 2022 as current assets reach renewal status. Moreover, it currently represents the market with the least amount of cloud shift. This is due to prior investments in data center hardware, virtualization and data center operating system software and IT services, which are often considered costly and inflexible,” Gartner reported.

Traditional infrastructure providers are going to have a tough time with cloud-driven disruption among IT enterprises.

On the flip side, this situation offers an opportunity for cloud providers to get the best out of the increasing market inclination towards cloud trend.

“The shift to cloud until the end of 2022 represents a critical period for traditional infrastructure providers, as competitors benefit from increasing cloud-driven disruption and spending triggers based on infrastructure asset expiration,” says Warrilow.

According to Warrilow, the cloud-driven disruption will have a major impact on decision-making among IT enterprises.

“As cloud becomes increasingly mainstream, it will influence even greater portions of enterprise IT decisions, particularly in system infrastructure as increasing tension becomes apparent between on- and off-premises solutions,” Warrilow adds.

While aforementioned information gave a quick snapshot of the cloud shift trend during 2018-22, more details about the cloud shift prospects are likely to be revealed at the upcoming Gartner Symposium/ITxpo 2018, one of the world’s renowned gathering of CIOs and senior IT executives.

The event to be held between October 29-November 01, 2018 on the Gold Coast, Australia will see leading analysts exploring cloud and supporting trends.

Any cookies that may not be particularly necessary for the website to function and is used specifically to collect user personal data via analytics, ads, other embedded contents are termed as non-necessary cookies. It is mandatory to procure user consent prior to running these cookies on your website.