The global cloud infrastructure spending has gone up 42 percent in the first quarter of 2019.

According to a recent survey report, the cloud spending in Q1 displayed a 42 percent rise over Q1 of 2018. However, there was a slight drop in overall growth rate, year-on-year.

“This is another impressive growth quarter for the cloud market. The decline in growth rate should not be viewed as a weakening market, but as an inevitable consequence of a market that has now reached massive scale,” says John Dinsdale, a chief analyst at Synergy Research Group.

According to John, this is the eighth consecutive quarter that the cloud market has reported rise, with USD 1 billion growth over the previous quarter.

Coming to the market share, Amazon continued its dominance in the overall market performance in the first quarter.

Next to Amazon Web Services (AWS) stood Microsoft, Google, Alibaba and Tencent with around 70 percent rise in their revenues, year over year.

“As the market goes from strength to strength the pack of cloud providers that are chasing Amazon has bifurcated into high-growth challengers and lower growth niche-oriented providers. But Amazon retains its strong leadership position and continues to control a third of the worldwide market,” says John.

By deployment, Infrastructure-as-a-Service (IaaS), Platform-as-a-service (PaaS) and hosted private cloud services made it to the top, accounting to USD 21 billion revenue. The revenues of these deployment models, for the last four quarters, was found to be more than USD 75 billion. 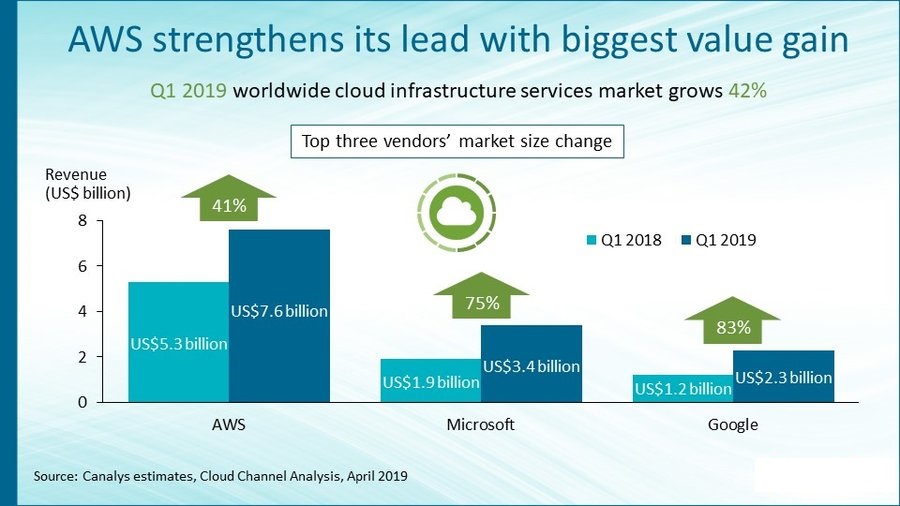 The top five cloud providers continued to show their dominance on the public cloud market, reflecting their control over three quarters of the market.

Overall, the global cloud market displayed a strong performance across all regions in the first quarter of 2019.