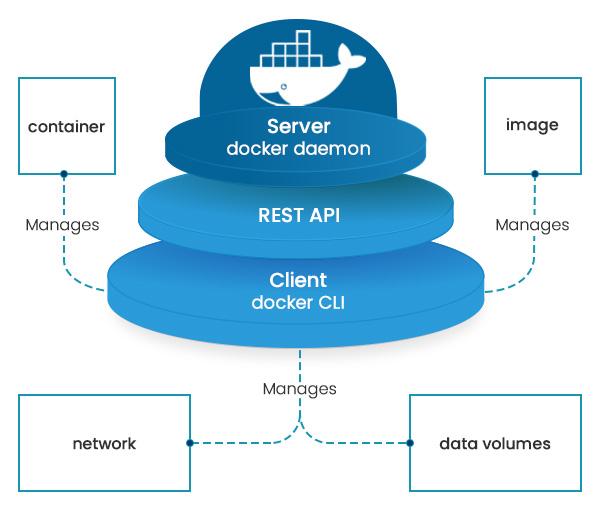 Quick process delivery is the common demand across every industry today, specifically the IT industry.

Various technology solutions have made their way to address this very ever-growing challenge. But Containerization and DevOps presented the unique approach!

While DevOps paved the way for continuous delivery through enhanced team collaboration, containerization made it much easier through effective ways to build, manage and secure portable applications.

This eventually boosted the speed of software delivery cycle and it’s the tools and resources that made all this possible.

While container apps are known for their portable and independent nature, Docker stands as the forefront of the container movement. Offering true independence between apps and infrastructure, Docker addresses file dependencies, configuration settings, security, version control and overall cross-platform collaboration.

Now, you no more have to stay limited on technology stack or legacy apps. Get the best of this Docker’s developer-infrastructure collaboration.

As a solution to diverse range of platforms across an app life cycle, Docker helps you easily secure and manage apps across all stages of development cycle.

It does so by packaging software into various standardized units called containers and compartments that possess everything the main product requires to run. This typically includes code, libraries, system tools and runtime.

With one of the simplest configurations, Docker container orchestration tool, also known as Docker Swarm, packages and runs apps as containers, locates existing container images from others and enables easy deployment on any platform.

Supporting easier integration with any operating environment, it acts as a central building block to send and scale use-cases into any platform and ensures the code is executed the desired way.

Because of their linking to open-source standards and independence to any specific infrastructure, Docker containers enjoy flexibility to run in any operation environment, be it on any major Linux distribution or Microsoft Operation Systems.

Docker features can be summarized into:

Looking at these features, you must be thinking of Docker implementation! But doing so with proper advisory yields better results.

Veritis As Your ‘Docker Consulting Partner’

Veritis has been one of the early adopters of Docker solutions and services with the unique implementation strategy.
In fact, Docker is one area among our various tools and resources we use part of successful DevOps and Container implementation.

Our Docker (DevOps) experts help you all ways to build your container ecosystem supported by effective Docker implementation, thus contributing to your DevOps success.

With Docker in place, you can find a single platform for multiple operations, increased and scalable innovation, smooth transition to any operating environment and more.

Association with Veritis for Docker Services provides you with a wide range of business benefits including:

Most Popular Tools and Services