Containers Vs VMs: Glance at ‘Security’ Pros and Cons 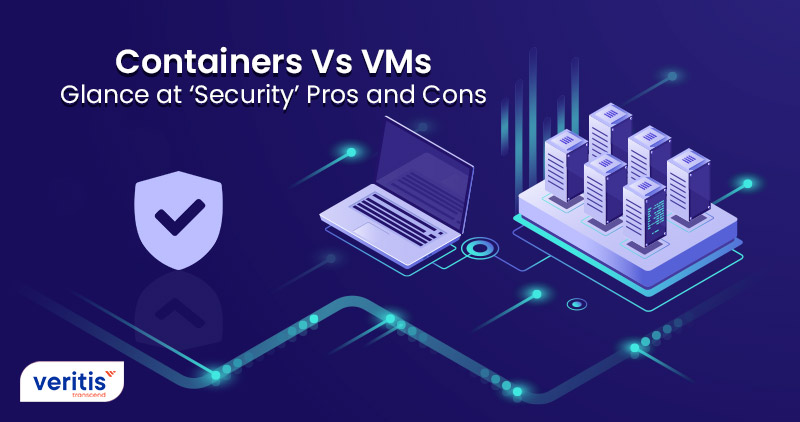 Containers have gained popularity for their ability to offer agility, scalability, and portability to applications. Because of this reason, they are often termed as an alternative to traditional Virtual Machines (VM)!

There are many advantages that Containers show over VMs such as:

Container application workloads make a lot of difference over VMs in many ways. However, one most common discussion that arises when comparing both i.e. the ‘Security’ aspect.

Virtual machines were the way to go before containerization became popular if you needed to separate environments within a physical infrastructure. However, the focus on containers changed when Docker Inc. unveiled its containerization software in 2013.

Since then, containers have gained popularity, changing the environment of cloud computing. In addition, containers’ agile development approach attracts an increasing number of engineers.  Virtual machines and containers were both created with the concept of making the most of resources from an already-existing physical infrastructure.

What are VMs or Virtual Machines? 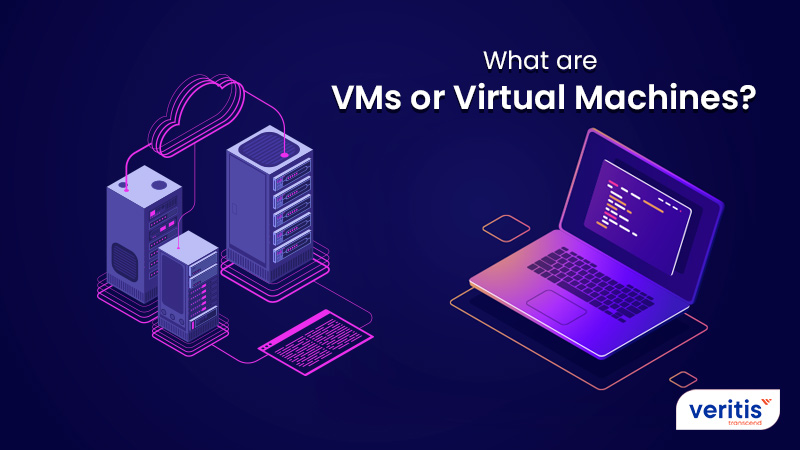 An isolated environment that simulates a computer system with access to real hardware resources is called a virtual machine (VM).

Although a separate physical server supports each virtual machine, it appears they are all running on bare-metal hardware. VMs are usually oversized, and many gigabytes in size since each VM container has its guest operating system, kernel, binaries, libraries, and applications.

Containers virtualize the host operating system and run packaged applications on top of it to create isolated environments on a physical server.

Unlike virtual machines, container applications virtualize the OS rather than the hardware. It is constructed over the host OS kernel and uses the same libraries and binaries.

Only the application and its dependencies are packed in container technology because they share most of their requirements. They are merely megabytes in size and far lighter than virtual machines. To deploy a container-based application, you need two components: a platform for container application orchestration and a container-building tool like Docker and Amazon ECS.

There are numerous platforms for orchestration and containerization. The most popular configuration for complex applications is the combination of Google’s Kubernetes container orchestration platform and Docker, a platform for containerization. A master node, worker nodes, and pods make up container technology. The control that links your requirements with the rest of the system is a master node. Your containers are in pods and will deploy pods to worker nodes.

What are containers in the cloud? A portable virtual operating system can hold all the software required to run a program. 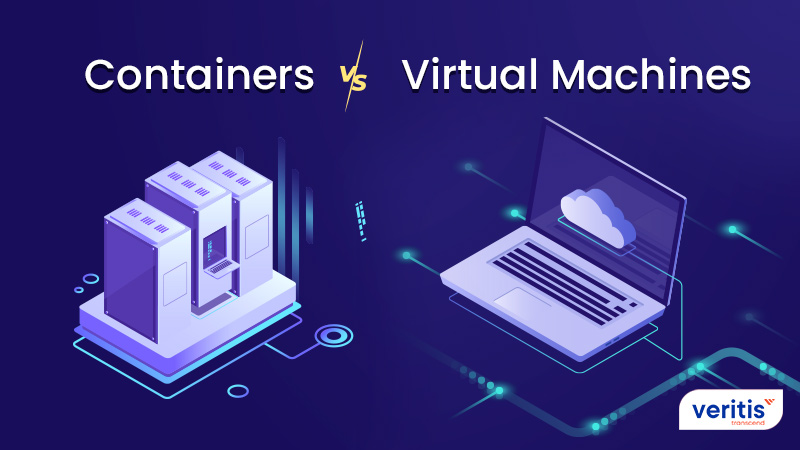 Your code is divided into manageable pieces that can handle separately because containers use a microservices-based architecture. As a result, you need not be concerned that updating or maintaining container virtualization will affect other parts of your application.

Containers are very portable when used as a component of a distributed system. Moreover, it is simple to move containers around, even between environments like the public cloud, private cloud, hybrid cloud, multi-cloud and bare-metal environments, because container technology compresses microservices and their dependencies in a small-sized package.

3) Efficient Use of Resources

Most dependencies required to execute containers in cloud computing, such as an operating system, libraries, and frameworks, are shared by code bundled within containers. There is just one copy of each relevant file in the hardware, unlike in virtual machines, which results in more efficient resource use. Additionally, since container virtualization is lighter, more containers in cloud computing can be placed inside physical server virtualization.

Platforms for container solutions orchestration were developed to assist you in managing your containers. A few tasks that container orchestrators like Kubernetes or Docker Swarm automate include scaling, networking, and deployment.

Applications that use containers are very scalable and can scale up and down quickly by adding new nodes and pods as necessary.

Containers offer minimal separation from the host OS and other containers on the same machine. As a result, the security boundary is less robust than with virtual computers.

According to StackRox, however, experienced container based virtualization users are more concerned with security as they work to enhance communication between DevOps and Security.

For instance, using a virtual machine saves you from purchasing multiple pieces of hardware when you need to mimic and test your applications across various operating systems to understand their capabilities better.

A virtual machine is given access to many more resources than container solutions are. VMs are, therefore, more suited for resource-intensive tasks. VMs are preferable to containers in cloud computing for tasks with more significant file volumes and lengthy lifecycles.

Resource-intensive operations can be executed on containers. However, the cost of using containers rather than a VM container must be considered. Prepare your requirements in advance and conduct research to determine which choice will be more affordable for your application.

Since you’re running a different operating system from the other machines on the same physical server virtualization, VMs increase the isolation level between nearby systems. In contrast, running within a single OS while using containers in cloud computing allows defects to damage the entire system.

Because of the complete isolation provided by VMs, security is improved, and vulnerabilities are more difficult to exploit. Virtual machines (VMs), which have a more assertive boundary, are preferred if you don’t have control over your environment.

Even so, top container based virtualization solutions providers are working harder to improve security over time, so you might soon see containers that are as secure as virtual machines.

1) Harder to Keep the OS Updated

You must update and maintain each operating system on its own because there are several in a single virtual machine. This is a laborious and time-consuming, especially if you have several virtual machines.

2) Inefficient Use of Resources

Virtual machines frequently offer too many resources to run a single application.

However, once a VM is allocated to a resource, even though it requires less capacity, it takes up the entire space. If your planning is flawed, this results in idle power that you can employ in other ways.

In addition, VMs contain copies of the virtual hardware that the operating system needs, as well as libraries, binaries, and other files. Repetitive files largely use the servers’ RAM and CPU. 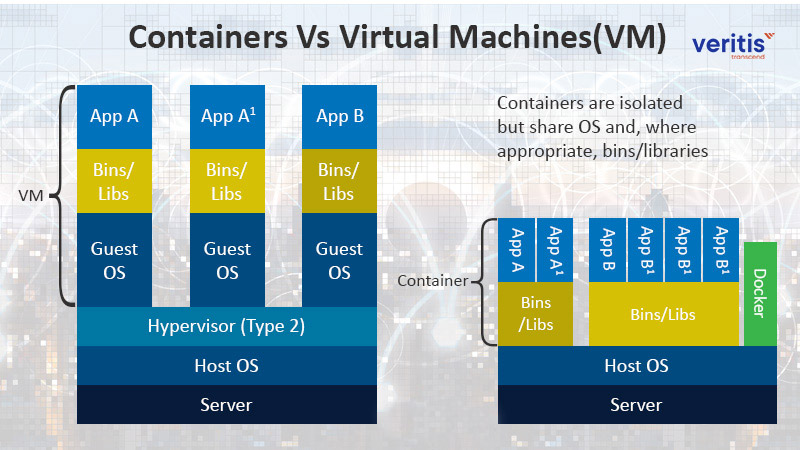 Segmentation boundary is the strong security aspect of a VM environment.

The boundary segment in a traditional virtualization environment lies between different ‘virtual hosts’, and between ‘VMs and hypervisor’. Thus, traditional VMs are preferred at areas that require strong segmentation boundaries, for example a multi-tenant cloud.

This level of segmentation boundary serves as a great advantage if there are any immediate changes to be made to the underlying network configuration, which the teams can address through micro-segmentation at the network layer.

It also means a lot in migrating a physical device migration to a virtual environment.

However, on the negative side, there are some potential downsides of this security aspect in traditional VMs. Generation of undesired images on a larger scale and outdated images in a serialized form on a disk are some serious challenges that might arise with traditional VMs.

This is where orchestration plays a crucial role!

Virtualizing or migrating physical devices to the hypervisor level will have more security coverage. But doing so improperly can make these systems problematic, causing them to pop up in unnecessary instances. 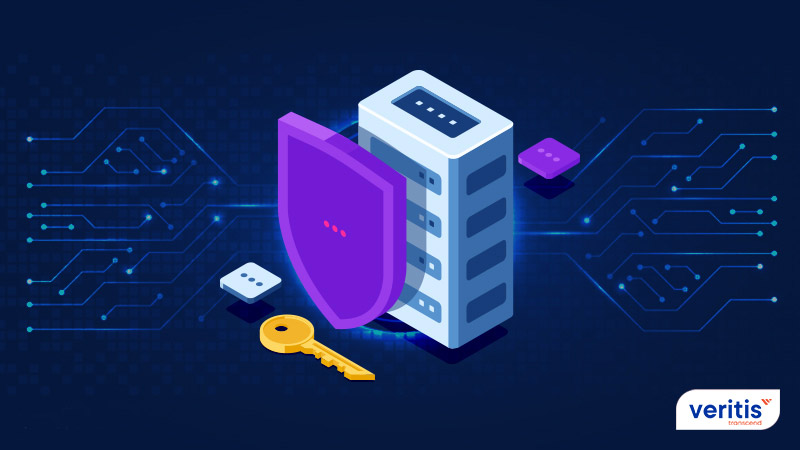 Containers are often thought about as something that ensures security boundaries like VMs. They may not guarantee in doing so. To the fact, containerization should be viewed as an advanced application packaging and delivery mechanism. Because of these misconceptions, containers are often considered ‘less secure’ for deployment.

Containers make use of OS features to create logical environments, which are controllable and require limited resource utilization.

While instances stay longer in a traditional VM environment, container instances can be torn down and rebuilt whenever for subsequent redeployments. This level of porous segmentation boundary in containers comes as a security advantage. This adds value to the broader microservices-based deployment model.

Outdated packages remain to be one of the most common vulnerabilities to applications running in VM.

Whereas in a container environment, microservices and CI/CD pipelines make releases more frequent and shorten workloads’ lifespan, thus minimizing the vulnerability through outdated packages. Moreover, the container engine’s host OS is strong and gets updated automatically.

Overall, Containers enjoy the ‘security advantage’ because of their association with the CI/CD pipelines that allow regular releases and keep them updated all the time with regular patch updates.

In contrast, workloads on VMs will need administrators to manipulate them frequently to keep applications and OS updated, which can cause a drift in the original state of the application’s lifecycle.

Last but not least, VMware provides both security and stability, which are essential for your production environment. However, numerous products are available to extend the functionality of Docker and VMware containers through automation, orchestration, and other features.

Now, it’s time to choose what your environment demands!