Blog
Home > Resources > Blog > Vertical Scaling Vs. Horizontal Scaling: Which One Should You Opt For?

Vertical Scaling Vs. Horizontal Scaling: Which One Should You Opt For? 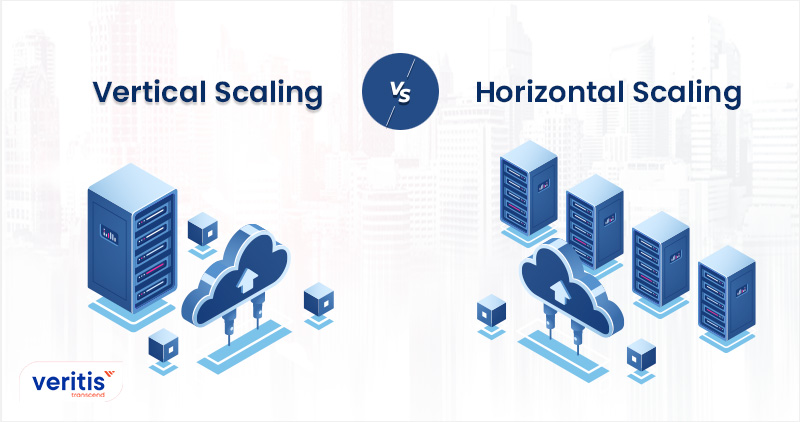 Change is one of the critical aspects that decide an enterprise’s future. While change fosters growth, enterprises would either have to expend many resources or shed some of the non-essential systems. In the traditional business houses, coping with the change is a big deal as one would have to make the changes quickly, and that is not something that everyone can perform deftly.

To boil it down, the organizations would have to add or shed some of their servers to handle the change in demand. While this is a complex task for the traditional legacy business houses, enterprises that have integrated with cloud technology experience seamless scaling technologies.

But, what is this scalability so strongly associated with cloud computing? Regardless of whichever sector you are in when dealing with the cloud, scalability is one of the aspects you keep encountering. And while scalability is what makes cloud outclass the traditional setups, there are certain intricacies involved.

In this blog, we shall explore scalability, what exactly these vertical and horizontal scalabilities are, and which one should go with.

Whenever there is a peak stage, one would need more resources and instantly capitalize on the time. And once the demand peaks, the user will be left with unwanted resources, which would metaphorically collect dust. It is like having an unmown lawn in day-to-day life, and to maintain it, you get a lawnmower and restore the lawn to its beauty. But, once the job is done, you have to tuck away the lawnmower until the next mowing session.

Instead, you don’t have the lawnmower in the cloud, and you don’t wish to have it around unless you need it. You get to go ahead and borrow the tools from your neighbors to get the job done. Once the job’s done, you get to return it, and with that approach, you don’t have to own a resource that you only need during certain times.

The same is with the cloud, you need to rope in extra resources only when you need them, and you are required to pay up only for what you use. These resources can range from extra storage to additional RAM power. Effectively, scalability takes on resources when required and during lean periods, shedding unwanted resources to save monetary resources.

What makes cloud scalability lucrative for businesses is instant availability. While there are predictive spikes, there is always a sudden surprise spike in traffic, and it demands stunted latency without downtimes. Thankfully, cloud providers make the required resources available within no time.

Now that scalability has been delved upon, let’s look at what vertical scaling and horizontal scaling are. 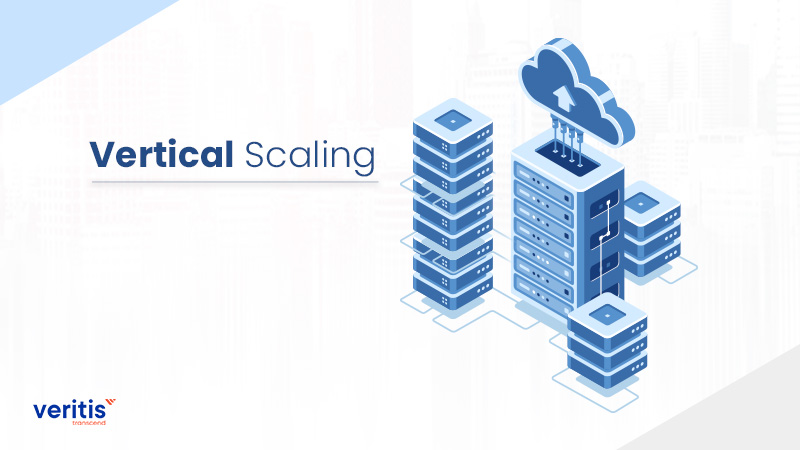 Vertical scaling refers to the up-scaling process where your infrastructure’s computational capacity is boosted to mitigate the new requirements. This process is also called scale-up, and it allows you to retain the resources in the existing logical unit. As a result, the infrastructure’s network capacity, storage power, and processing ability will be expanded. 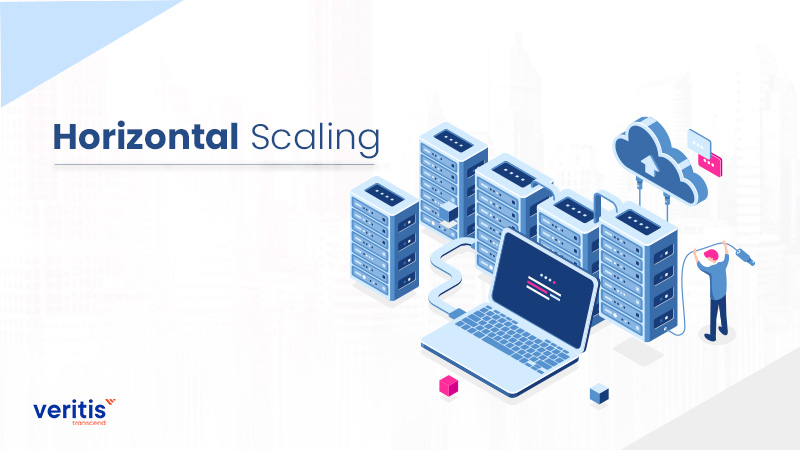 The other aspect they differ upon is that a sequential piece of logic is broken into smaller units and implemented on multiple devices in horizontal scaling. The breakup of the code allows programmers to execute multiple tasks parallelly over different devices. This is not the case with vertical scaling, as the logic code remains unchanged. The unchanged code is run across the boosted infrastructure. With the differences out of the way, let’s look at the advantages of both the scaling methods.

Pros and cons of Vertical Scaling and Horizontal Scaling

As with everything, both the scaling methods have their advantages and disadvantages. Both approaches differ, particularly on code and hardware. There is no code change involved in vertical scaling; it is much easier to execute than horizontal scaling. The operations are easier to manage, and the data is centered upon one node.

This centralized node allows you to run the operations across multiple devices. In addition, the expenses are reduced in vertical scaling as your infrastructure footprint isn’t increased. This boils down to the company not dedicating extra monetary resources for power consumption and cooling units. Additionally, managing the network from the nodal device is more straightforward and better from the control point.

The disadvantage of vertical scaling is that your hardware can only expand up to a specific limit. Though one can always boost the hardware on certain aspects, the scope to expand it holistically narrows down significantly. Also, one would have to shut down the required devices whenever they are scaling up, resulting in downtime. Additionally, the nodal device has to be taken care of as unexpected downtimes from that device would stunt productivity.

Horizontal scaling scores well on these aspects as one just adds on additional devices to consume the existing power. There is no downtime involved, and you can choose how many devices you choose. Additionally, the nodal control mechanism doesn’t exist in this scaling approach, and this betters resilience. However, it runs aground on the data aspect. The data must be partitioned into multiple units due to the existence of multiple devices. This partition also complicates data sharing and processing. 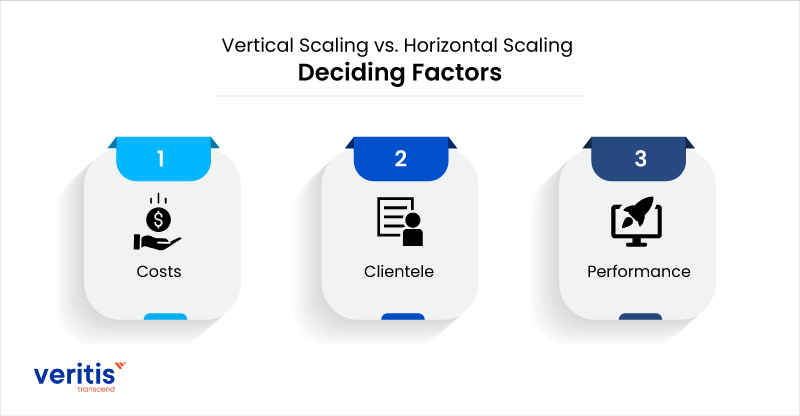 With both approaches scoring over each other, it boils to a few crucial aspects which help you decide which one you should go with.

Vertical scaling requires you to spend at the onset of the adoption itself. You will pay for the higher power, and effectively, it fares well in the initial stages. In horizontal scaling, you wouldn’t have to pay up much at the onset of the scaling process. You would be required to pay up for the devices when you opt for them, but later on, your cost overheads would crop up in the form of cooling systems and space requirements.

Horizontal scaling allows you to circumvent latencies and outages. You don’t have to shut down the servers to implement the scaling process. Should the customer base be localized and if the burgeoning requirements demand higher processing power, it would be better to adopt a vertical scaling process. As the latencies and outages are involved, your clientele should be okay with such aspects.

Vertical scaling reduces your flexibility to a certain extent as today’s technology would limit you. In this approach, you wouldn’t have the freedom to choose whatever you wish. In horizontal scaling, you can choose the required configuration and optimize operational costs.

While it seems the choice is easy to make, scaling is decided by your infrastructure’s architecture and other factors. Also, you should realize that vertical and horizontal scaling is not a choice one should always make. One can implement both the scaling processes and reap the benefits of it.

So, reach out to us and scale your infrastructure in the best way possible.

Is horizontal or vertical scaling better?

Both have their benefits. Vertical scaling provides you higher processing power, data servers, and additional resources.

Horizontal scaling gives you ability to distribute your existing power better by adding more devices to the infrastructure.

At the onset of the vertical scaling, you would have to expend monetary resources to get started and the overheads come down relatively.

In horizontal scaling, your overheads increase after you start as you would have to spend on cooling systems and make space for the increasing devices.

What are the benefits of horizontal scaling?

Horizontal scaling allows you make use of the existing computational power. Additionally, you get to add devices of your choice.

Additionally, you don’t have to cough up a great deal of money at the onset of horizontal scaling as you need to spend the money only on the devices procurement.

What are the challenges of vertical scaling?

Vertical scaling doesn’t give you the choice to pick the configurations of your choice. This is one of the primary impediments of vertical scaling. While there are other challenges, there aren’t as sever as one would expect.

What are the two main types of scaling in cloud computing?

What does scalability mean in cloud computing?

Demand fluctuates and there are always constraints which encourage you to scale up on your resources or scale down when you no longer need so much power. This capability is called scalability.

Where is horizontal scaling used?

Horizontal scaling is used by companies which have global audience. As the number of users fluctuate, the companies indulge in this scaling approach to wick away outages potentialities.

Where is vertical scaling used?

Vertical scaling is used by companies which afford minor downtimes and by those who need high processing power with expansive storage.

The downtimes come into the picture as companies may need to rejig their hardware to match new processing abilities.