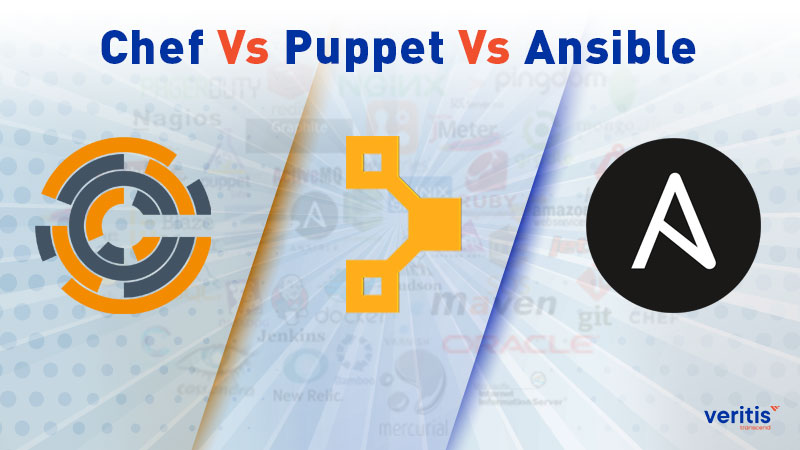 Chef Vs. Puppet Vs. Ansible, this is a dilemma that every organization has. Since DevOps has evolved rapidly and becomes part and parcel of every business function in the digital trend, this comparison is quite relevant and pressing.

Many organizations are increasingly adopting the new collaborative culture in a bid to achieve a competitive edge in modern IT.

DevOps automates and monitors the process of software creation, ranging from integration, testing, releasing to deploying and managing it.

DevOps has successfully laid down the path to take the IT industry to the next level by facilitating a host of benefits including faster delivery time, 100% customer satisfaction, quick fault detection, CI/CD and high ROI.

However, while every IT company is finding out ways and chalking out plans for effective DevOps implementation, many are failing to meet the expectations.

Embracing the right DevOps platform or configuration management tool is one of the major challenges encountered in DevOps implementation.

There are a number of latest DevOps configuration tools such as Chef, Puppet, SaltStack and Ansible with various features available in the market.

So, there is an inevitable need to compare Chef Vs. Puppet Vs. Ansible tools to identify the best tool for the success of DevOps projects.

At this very juncture, we bring you the comparison of the top configuration tools including Chef, Puppet and Ansible.

Chef vs Puppet vs Ansible – What are the differences?

The three configuration tools are simple to use and yet facilitate robust capabilities to automate complex multi-tier IT application environments. 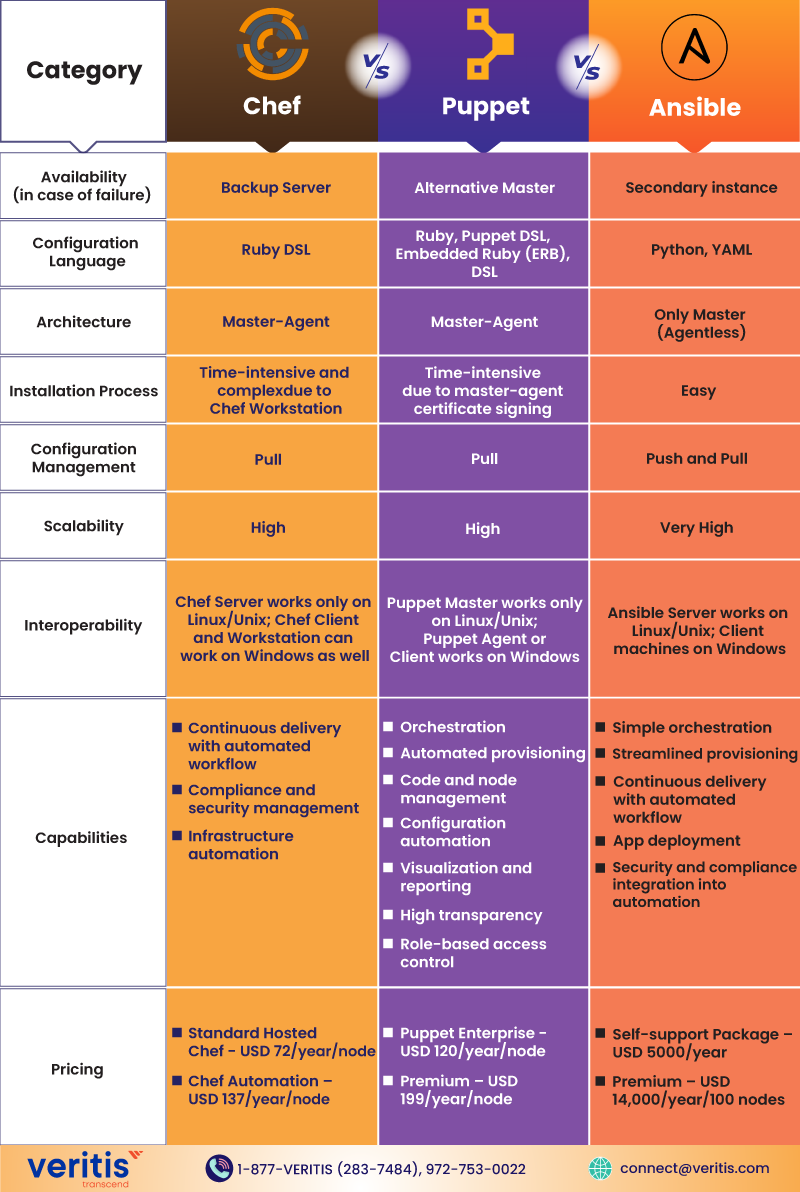 The distinctive difference between Ansible, Chef, and Puppet is the underlying script. While Puppet is coded in Ruby, Ansible utilizes Python and YAML scripts, and Chef is built on Ruby like Puppet. However, in the Puppet Vs. Chef bout, Chef is different from Puppet as it is programmed on Ruby combined with Domain Specific Language. The other differences in Chef Vs. Puppet Vs. Ansible are portrayed based on different factors, including Availability, Configuration Language, Setup and Installation, Ease of Management, Scalability, Interoperability, Tool Capabilities, and Pricing.

The availability of the three configuration tools, Chef, Puppet, Ansible, in the event of main master or server failure is very high. Every tool has the facility of a backup server or an alternative master to render support in case of main server failure.

In terms of configuration language, YAML is considered to be the easiest one as it is similar to English and is human-readable. While Puppet DSL and Ruby DSL languages create setbacks for management.

Once again Ansible portrays its dominance over the others in terms of management as it supports YAML language and follows both push and pull configurations.

Scalability of the configuration tools is one of the main factors enterprises consider before choosing the tool.
Chef, Puppet, Ansible can manage large infrastructures while handling the burden of scaling configurations. However, there is a slight difference between them in terms of scalability owing to the complexity of their configuration language.

In terms of interoperability, all three tools, Chef, Puppet, Ansible, have similar features. In three cases, all the servers work on Linux or Unix machines, while slaves or nodes will work on Windows machines.

A review of the product capabilities in Chef Vs. Puppet Vs. Ansible can help in choosing the most suitable tool for your requirements. Each tool has its own set of capabilities that are better in its own way.

Pricing plays a prominent role in decision making for the adoption of configuration management tools or, in general, any product or technology.

All three tools, including Chef, Puppet, Ansible, have their advantages and are better in their way. Each tool takes a slightly different approach to automation and is suitable for specific user segments in the same target space.

It’s imperative for the organization to consider various technical and business aspects including architecture, features, usability and support to choose the best configuration management tool.

FAQ’s on Chef Vs Puppet Vs Ansible

Chef is a configuration management automation tool that provides a route to define infrastructure as a code (IAC). It is an open-source tool which is compatible with GitHub forks and GitHub stars.

What are the benefits of Chef?

Chef is one of the most significant tools in the cloud platform that benefits the entire organization’s infrastructure.

What are the benefits of Puppet?

Puppet has plenty of benefits and some of them are

Ansible is a simple tool that provides powerful automation for IT tasks such as application deployment, intra-service orchestration, configuration management, and provisioning.

What are the benefits of using Ansible?

Ansible can provide numerous benefits. Some of them are simple to learn, easily understandable python language, no dependency on agents as Ansible galaxy and playbooks are written in YAML

What are the features of Ansible?

What are the uses of Chef, Puppet and Ansible?

Puppet, Chef, and Ansible are the top three industry-leading configuration management tools that are built to install and manage software on existing servers.

What are the common features in Chef, Puppet and Ansible?

Chef vs Puppet vs Ansible vs SaltStack: What is it?

Puppet, Chef, Ansible, and SaltStack are the four top contenders in the DevOps tools, including DevOps certification.